YouTube has removed an interview with former President Donald Trump that was posted earlier today. The video had over 5 million views in less than 24-hours of being posted on the Full Send Podcast hosted by the Nelk Boys. 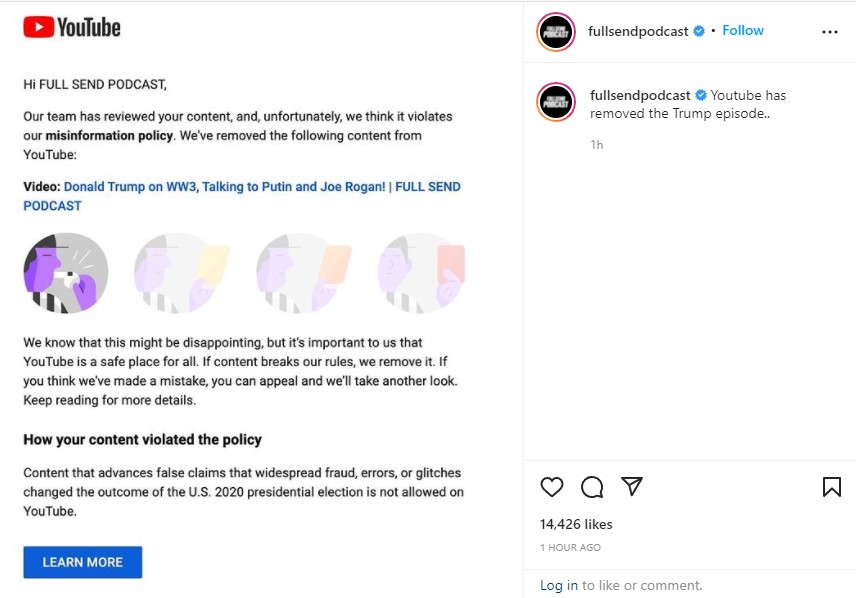 "Youtube has removed the Trump episode" according to a post earlier this evening on the Full Send Podcast's Instagram page. Ironically, Trump warned the Nelk Boys during the podcast "let's see what happens when they take it down." Kyle Forgeard, co-creator of Nelk, replied "I don't think YouTube would take it down. There's no way."

Trump discussed a variety of topics during the hour-long podcast including the tragedy occurring in Ukraine, the United States withdrawal from Afghanistan, oil prices, the 2020 election, and more.

"Does it suck that you can't say these things because of big tech censoring you?" asked one of the Nelk Boys. Trump responded, "If we talk about the election fraud, they will not cover it." According to YouTube, the podcast was removed because it contained content that advances false claims that widespread fraud, errors, or glitches changed the outcome of the U.S. 2020 presidential election. Trump discussed the election for approximately 1 minute out of the 53-minute video.

The Full Send Podcast currently has 1.27 million subscribers on YouTube. They host a variety of guests ranging from Mike Tyson, Shaq, Dana White of the UFC, Jake Paul, and others. They have 235,000 followers on Instagram.

The show's Instagram followers were quick to express their frustration. "We gotta end Big Tech censorship. That's ridiculous" commented one user. Another user claimed "Mainstream is a joke. Freedom is dead."

The episode is still available to be streamed on Full Send's website. However, you won't be able to find it on YouTube anytime soon.

"So 5 million views in 24 hours, YouTube has just deleted our Trump podcast episode. Trump was right, Trump was right" co-creator Kyle posted on his Instagram page.

YouTube has come under fire in the past year for allegedly censoring content creators. In an op-ed posted on the Wall Street Journal earlier this year, YouTube's CEO Susan Wojcicki stated "we're working to protect our community while enabling new and diverse voices to break through." According to the CEO, "companies should have flexibility to develop responsible practices to handle legal but potentially harmful speech."

It's difficult to see how anything in the Full Send Podcast could be construed as harmful speech. Trump only discussed the 2020 election for about a minute during the podcast, despite it being the reason for YouTube's removal of the video. YouTube did not immediately respond to a request for a comment.